The temple is located in Rajahmundry town which is at a distance of 65 Km from Kakinada and 70 Km from Amalapuram. Ac cording to the recitals, a Muni called Mrukhanada dedicated for Meditation with an object of getting children and Lord Siva gave Varam at the choice of Muni to select a Baby having no husband throughout her life or a Boy surviving 11 years for a sprit of devotion and pious personality. The Muni choosed a Boy at the instance of Lord Siva. Lord Siva gave varam accordingly.

The Boy, named 'Markandaya' having the knowledge of his short survival, dedicated his life for Tapasya, installed a Lingam at the place where the temple is now situates and worshipped the Lingam. On attaining the age of 11 years, Yamah tried to take his life but, Lord Shiva came to the rescue the Boy and gave varam of total survival of his life. The Boy completely dedicated his life for the worship of Lord Siva and reached Siva and Parvathi Ammavaru. This is the Historical back-ground. As the Idol (Lingam) and Ammavaru are stated to have installed by Muni Markandeya, the temple is popularly known as Sri Markendeyeswara Swamy Varu.

According to the Records, the Temple was managed by Sri Raja Raja Narendhra, Cholas and subsequently by Reddy Rajas. It was installed in a site measuring 1000 Sq. yards and it was about 194 years back.

It is at present Managed by an Executive Officer of Grade-I under the control of Endowments Department.

Annual Kalyanam, Kartikamasam, Mahasivarathri and Devinavarathrulu are being celebrated at the appreciation of public. Saswatha Poojas are also introduced by the Executive Officer and it has given good response and also helped for better augment of income of the temple. Annadana Scheme is proposed to be introduced raising funds from phylonthropic public and it will be materalised shortly.

An appeal to the public and phylonthropic persons is to donate funds to the temple for development of rituals and saswatha annadanam scheme proposed to be introduced. Donations may be sent in favour of the Executive Officer of Sri Uma Markandeyeswara Swamy Devasthanam, Godavari Bund, Rajahmundry Town, E.G. District. Any correspondence may be made in favor of the above address.

The temple is an ancient and historical one in both East and West Godavari Districts. His holiness Kanchi Kama Koti Peethadhipathi, Sree Srungeri Peethadhipathi, Kurthalam Peethadhipathi and Saraswathi Jayendaraswamy have visited that temple and worshipped Lord Siva and Ammavaru.

Public contribution are invited to undertake developmental activities. Annadhanam scheme is proposed to be introduced public donations invited. The scheme is to be exempted under section 80(G) of Income Tax Act.

Devinavarathrulu will be performed from Asvija Bahula Padyami to Dhasami. (October). During that time everyday Navavarna Archana, Suhasini Pooja and Devi Avatharams will be exhibited besides Dhoopa Prakara Seva's and Special Poojas also will be performed.

Lot many number of 3 Star Hotels are available in Rajahmundry.

Posted by Unknown at Wednesday, March 23, 2011 No comments: Links to this post 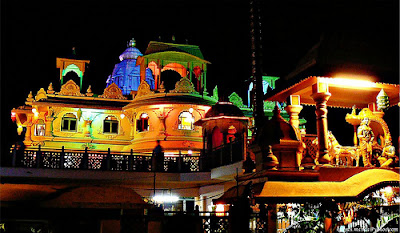 The ISKCON Rajahmundry temple is built in two acres of land situated on the bank of sacred river Godavari.This place has got significance because many Rishis performed their tapasya.Sri Chaitanya Maha Prabhu met his disciple sri Ramananad Raya then governor of Chennai province under the Devotee King Purushotham Maharaj .The famous conversation among the Lord Sri Chaitanya and Ramaananda Raya took place on Godavari Bank and now this place is known as Ramananda Raya Gaudiaya Math.

Around the ISKCON Temple there are ten mantaps of lord's ten incarnations (Dasavatras).It is built uniquely and it is the third largest temple after Bangalore and Tirupathi in south India among ISKCON Temples .There is vedic exhibition in cellar of the temple complex depicting Lord Krishna, lord Rama and Chaitanya lilas which attracts students ,devotees and visiting public.The temple is visited daily by 1000 to 1500 devotees and on Sundays 6,000 to 8,000 devotees and on Janmasthmi day 50,000 devotees.

On every Friday the Lord Govinda Srinivas Abhishekam is performed at 6:30 am. On every Saturday and Sunday there is sannai vayidyam is performed with musical instruments glorifying the Lord .

The temple is opened at 4:30 am starting with Mangala arathi, the first arathi of the day. Mangala arathi is very auspicious . Many devotees attend this arathi. Srila Prabhupada insists that all devotees should attend Mangala arathi. After Mangala arathi the darshan is closed and there is Tulasi arathi. 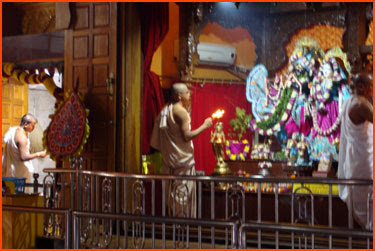 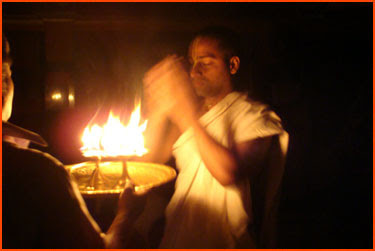 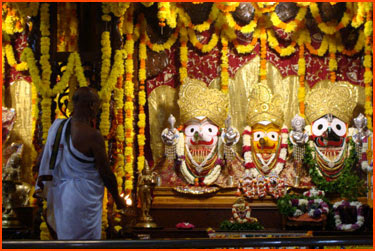 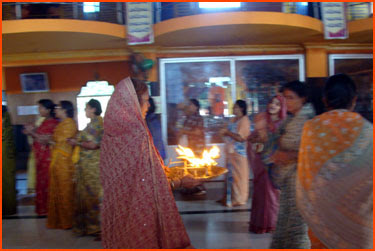 At 6:30 pm there is Tulasi arathi followed by Sandhya (Gourva) arathi. After Sandhya arathi there is Bhagavad Gita class from 7: 30 pm to 8:30 pm. Soon after the class there is unjal seva(julan yatra) to the lordships Sri Sri Radha Gopinath. The temple is closed after unjal seva i.e. at 8:45pm. On very special occasions such as sri Krishna janmasthmi etc the temple is opened all over the day.

Apart from this the deity of mother Godavari is offered pooja two times daily i.e. at 1:00 pm and 6:00 pm. 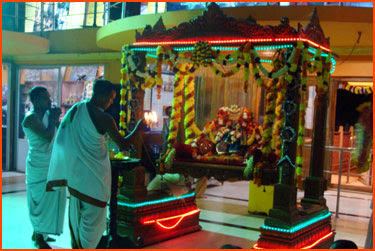 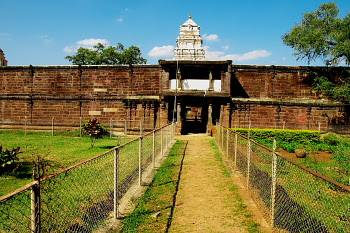 Samalkot is located at a distance of 12 km from Kakinada, 52 Km from Rajahmundry. Bhimavaram (Lat. 17o 02'N, Long. 82o 12'E), which now forms part of Samalkot town, is known as Bhimavara Kshetram with its famous temple of Kumararama - Bhimesvara. The village was known in the past as Chalukya Bhimavaram according to the inscriptions found in the temple. It is situated at a distance of about 11 kilometers to the North of Kakinada in East Godavari District of Andhra Pradesh and is on the Chennai - Howrah broad gauge railway line of South - Central Railway. 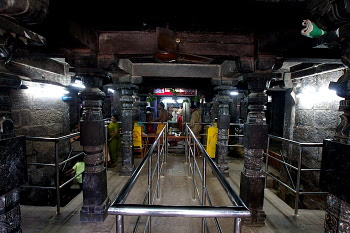 The place was under the yoke of several ruling houses from Nandas of Pataliputra to Asaf Jahis of Golkonda in its long history and was subjected to so many vicissitudes from the dawn of Christian era. Among the various dynasties that ruled over this region the Eastern Chalukyas had a lion's share in shaping its destiny and as such it is no wonder that they had the privilege of exercising greater control and conspicuous influence than other dynasties. 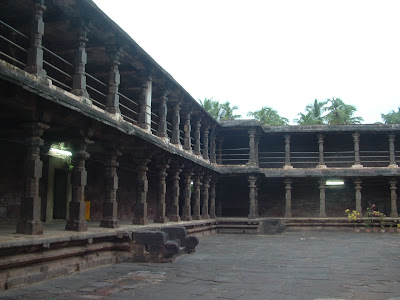 The Eastern Chalukyas, also known as Vengi Chalukyas, ruled Andhra country for four and half centuries from AD 624 to AD 1076. The Kingdom of Vengi comprised at its greatest extent the whole area between the Mahendra Mountains in Kalinga and the Maneru River in Nellore; its Western boundary ran in general along the foot of the Eastern Ghats, though temporary extensions often brought areas of farther west under the rule of Vengi from time to time.

There were about 30 kings in this dynasty starting with the founder king Kubja Vishnuvardhana (AD 624 - 642) to the last king, Vijayaditya-VII (AD 1068-1076), who ruled first from Pishtapura, next from Vengi and then from Rajamahendri (Rajahmundry) and their hisotry is largely a record of disputes about succession. For some time the Rashtrakutas and the Chalukyas of Kalyani from the West and later the Cholas from the South interfered in these dispute. Of the kings, Narendra Mrigaraja Vijayaditya (AD 805 - 846), Gunaga Vijayaditya (AD 848 - 891), Chalukya Bhima-I (AD 892 - 922) Danarnava (AD 971 - 973), Ammaraja II (AD 945 - 970) and Rajaraja Narendra (AD 1019 - 1060) are the greatest patrons of Art & Architecture and Telugu Literature.

Rajaraja Narendra is said to have laid the foundation of the new city called Rajamahendravaram (Rajahmundry) after his name. On the request of Rajaraja Narendra, his court poet Nanayya began to translate Sanskrit Mahabharata into Andhra Mahabharata, which stood as a land mark in the development of Telugu literature. his temple, known as Kumararama at Bhimavaram in Samalkot is one among the five important and popular 'Pancharama' temples of Andhra.

The other four temples dedicated to Siva are Amararama at Amaravati (Dist. Guntur), Daksharama at Daksharama (Dist. East Godavari), Kshirarama at Palakollu and Somarama at Gunupudi - Bhimavaram (both in Dist. West Godavari). There is an episode on the origin of these 'Pancharamas' which is also found in 'Bhimesvarapurana' written by Srinatha (AD 14th - 15th Century). According to it, Lord Vishnu, in his charming and fascinating incarnation of Mohini started distributing the nectar (amrita) obtained after the hazardous churning of the ocean to both the demons (asuras) and divined (devas) Dissatisfied with the injustice meted out to them in the manner of distribution of nectar, the asuras lead by the lords of Tripuras resorted to severe penance on the advice of the celestial sage Narada and were blessed with boons by Lord Siva. Thus with the power newly acquired through the boons, they inflicted atrocities on the devas, who sought refuge with Lord Siva.


On hearing the pitiable plea of the devas, Siva killed the asuras with his infallible Pasupata (a spiritual weapon of flame), which reduced them and their kingdoms to ashes. This material aspect of Siva is better known as Tripurantaka. However, a huge stone linga, worshipped by Tripuras, remained intact after the encounter. This was cut into five lingas by Lord himself and distributed for the purpose of installing at five different places which came to be locally known as Pancharams.

According to the inscription at Pithapuram, it is very clear that the temple of Kumaram Chalukya Bhimesvara was constructed by the famous Eastern Chalukya king Chalukya Bhima-I towards the end of the 9th century AD and the presiding god Siva, in the form of tall Sivalinga, was named after the monarch as Chalukya Bhimesvara. The inscription states that Chalukya Bhima, the son of Vikramaditya having been victorious in three hundred and sixty battles ruled the earth for thirty years.

The Bhimesvara temple at Samalkot is similar in architecture to that of the Bhimesvara temple at Daksharama. The temple is surrounded by two prakara walls built of dressed sand stones. The outer prakara wall is pierced by gopura - entrance on all the four sides. The four gopura - dvaras have ardha - mandapas on either side. The inner enclosure wall is divided horizontally into two sections separated by a cornice. It has a two storeyed pillared mandapa running all the inner side.


The main shrine is a free standing monument lying at the center of the inner enclosure. The temple is a rectangular structure and has two storeys. The lime stone Linga, installed in the shrine, is so tall that it rises from the pedestal on the ground floor and enters the second floor by piercing the roof, where the Rudrabhaga is worshipped. The present Vimana of the main shrine has been renovated and is covered with thick plaster. It consists of flat pattas, row of geese kutas, salas, simhalalatas, lotuses and kalasa. It is a dvitala vimana of the dravida order with regional variations. Like in Daksharama, a miniature temple model, found in the court yard of the temple, shows the whole temple with all the architectural details, possibly used as model before erecting the temple ranging from AD 1147 to 1494, recording gifts made to this temple. These epigraphs refer to the construction of mukhamandapa at the Eastern entrance in AD 1394.


Further the erection of the additional structures like Srimukhamandapam and niluvu mandapam on top of it in AD 1422 are also mentioned in the inscriptions.

There is a monolithic pillar on the western side, locally known as kappa stambham containing an inscription which records that when some thieves pulled down the nandi from the pillar from material gains, a new one was fabricated and installed by a lady named Lakshmi wife of Narasimudu, after bringing the stone from Kotilingalu at Rajahmundry.


R & B Guest House is available at Peddapuram which is at a distance of 5 Kms. There are lodgies in samalkota and peddapuram.