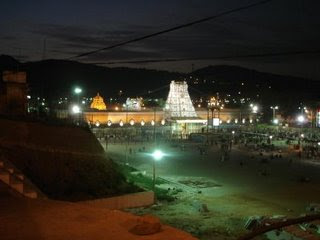 SriKalahasti temple is located 36 km away from Tirupathi in Chittoor district of Andhra Pradhesh, India. The inner temple is constructed around 5th century and the outer temple was constructed in the 12th Century.Location of Sri Kalahasti Temple
Srikalahasti is a holy town and a municipality near Tirupati in the Indian state of Andhra Pradesh. It is located on the banks of the river Swarnamukhi. Recently, it has been included in the TUDA (Tirupati Urban Development Authority) region.


Kalahasti is surrounded by two hills. The Durgamba temple is on the north hill and the shrine of Kannabeswara on the south hill is in memory of the Sage Kannappa, who offered an eye to the Lord. There is also a temple dedicated to Subramanya on one of the hills. A river flowing in the north washes the foot of the temple. The main linga remains untouched by human hands; even the priests do not touch it. Abhishek (bathing) is done by pouring a mixture of water, milk, camphor and panchamrita. Sandal paste, flowers and the sacred thread are offered to the utsava-murti, and not the main linga. It has an enormous, ancient gopuram over the main gate, which is 36.5 metres (120 feet) high and the entire temple is carved out from the side of the hill. King Krishnadeva Raya built this temple in1516. The temple is very ornate with elaborately designed pillars, altars, etc.

The temple occupies the area between the riverbanks and the foot of the hills and is known as Dakshina Kailasam. The three gopurams are remarkable in their architecture. A hundred-pillared mantapam is another important feature of this shrine. The tower was established nearly a thousand years ago. The various stupas and temple testify to the antiquity of the place.

According to ancient Tamil sources Sri Kalahasti has been known as the ‘Kailas of the South’ for slightly more than two thousand years and the small river on whose banks it sits, the ‘Ganges of the South.’ Kailas is perhaps India’s most revered spiritual symbol. It is the abode of Shiva, from whose head, according to legend, the Ganges is said to flow. Shiva, ‘that which is auspicious at all places, times and in all circumstances’ is a symbol of the Self and the Ganges flowing from his head represents the spiritualized or awakened mind. A mind sourced in Spirit is a river of immeasurable power and life-giving goodness. The claim that Kalahasti is the ‘Kailas of the South’ simply means that the small hill near the temple is to be taken as the spiritual equivalent of the Himalayan Kailas. Likewise, the small river flowing in a northerly direction beside the temple is to be taken as the mighty Ganges. 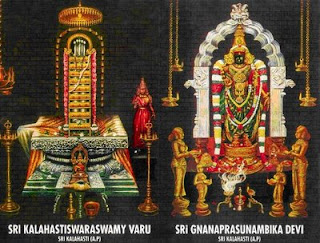 Even the cardinal directions have assumed symbolic significance in Pauranic culture. Obviously context should be taken into account when divining the meaning of a symbol, but north, for example, is said to be the abode of the Self because from the immortal ‘northern’ position the Self looks out on the ‘southern’ world of time and death. The idiom to “head south’ means to go downhill, to decay. The God Dakshinamurthy whose name means ‘the one facing south’ and whose idol (murthy) is installed in the Kalahasti Temple, sits in the North and faces south. East often represents the dawning of wisdom, the sun being another common Self symbol. The symbolic use of direction culminates in the idea of building temples at the point on a river where its meandering points it back to its source. The holiest city in India, Benaras, is built on a stretch of the Ganges that flows northward, the idea being that when the mind turns back toward its source, the God/Self, it realizes its innate divinity. So, the small river on whose banks the Kalahasthi temple is situated is meant to remind us of the Ganges and the wealth of spiritual associations it conjures.

The Vedas posit four ends for which human beings strive in their search for happiness: pleasure (kama), security or wealth (artha), duty (dharma) and freedom (moksha). In the temple at Kalahasti these four universal motivations, which may take any worldly form, are, according to temple literature, converted into spiritual impulses. They are represented by four deities facing in the four cardinal directions. Shiva in the form of Dakshinamoorthy represents desire, in this case the desire for liberation, although he more commonly is said to represent the feeling of wealth (dakshina) that comes when you know who you really are. At Kalahasti the Goddess Gnanaprasoonamba (the giver of knowledge or the mother of all knowledge) represents the ‘wealth’ i.e. freedom from limitation conferred by Self knowledge. The deity Kalahastishwara (the lord of Kalahasti) faces west and symbolizes liberation. Liberation, the death of ego upon the rediscovery of the Self, is the final stage of life just as setting is the sun’s last act before it disappears over the horizon. Unfortunately the temple literature from which this information was gleaned neglected to include mention of the forth deity.

The most revered and universal symbol of the Self is the human form, ‘man cast in the image of God’ and its spiritual significance is difficult to overestimate. Rather than conceive of us as tainted sinful human creatures, the Upanishad tells us that we are divine. It says, “That which you worship there is this that you see here.” The ineffable formless God/Self perceived by mystics is this whole world and everything in it. While Hindu deities often sport dozens of arms and animal heads their essential forms are recognizably human. Probably no other idea accounts for the astonishing fact that one billion people stuffed into a land mass one third the size of the United States undoubtedly handle their lives more confidently than their prosperous Western counterparts.

SriKalahasti got its name because in days of yore a spider (sri), serpent (kala) and elephant (hasti) elephant worshipped Shiva with great devotion. A spider lived in the inner sanctum and worshipped the Lord by weaving elaborate temples and images of Shiva. One day a breeze came up and caused the altar fire to destroy the spider’s offerings. It became angry and was about to gulp down the flame, (realize the Self) endangering its (ego’s) life. Appreciative of its devotion, Shiva appeared and granted the spider a boon. The spider requested moksha, release from the cycle of births and deaths. Accordingly it became one with Shiva, the Self.

A cobra worshipped Lord Shiva by offering rare gems, pearls and rubies that it brought from Nagaland, a mythical place where Nagas (serpents) dwell. Serpents are one of India’s most visible symbols of the spiritual power of the Self. The spiritual power of the Self, called Kundalini, the latent electricity of Consciousness, is hidden in the dark recesses of the unconscious like a snake hidden deep within the earth. After the snake had worshipped, an elephant, fresh from its purifying bath in the nearby river, came to worship. In preparation it sprayed the altar with water from its trunk, scattering the gems. It then proceeded to decorate the altar with leaves from a holy tree. When the cobra returned it was angered to see its offerings disrespected and replaced by mere leaves. So it replaced the leaves with gems. This charade repeated itself every day until the cobra became fed up and decided to punish whomever was destroying its offerings. When the elephant returned to worship with its leaves the cobra slithered up its trunk and injected its venom. In agony the elephant dashed its head on the stone altar in an attempt to kill the snake. The snake fell out of the trunk and died from its wounds and the elephant succumbed to the poison. Understanding that both had sacrificed their lives for the sake of their love of the Lord, Shiva resurrected them, gave them liberation and took them into his own body. At the foot of the linga one can see a spider, two elephant tusks and a five-headed (the five elements) serpent to remind the devotee of these acts of supreme devotion.


If you are planning on visiting the
Srikalahasti Temple here are some tips:

Please plan your trip in such a way that you can spend some time exploring the physical and spiritual beauty of the
Srikalahasti Temple .

In the outer
Srikalahasti Temple , as soon as you enter the temple gates (after the shops)on your left you will see the old idol of SriGnanaprasunambika Devi (the original one) which was placed outside due to some reasons.....Still lot of people pray to it....

By the way, do not forget to see the Pathala Ganapathi who is associated with the old Sivalingam beneath the temple. You cannot see the Old SivaLingam (related to the old Story of SriKalaHasti) beneath the temple but you can imagine it (and the real story) when you see the Lord Ganapathi (Not sure about this).


Even though lot of people go to this temple for Rahu-Ketu Puja one thing they are forgetting is the powerful main deity (SriKalaHastheeswara) with navagraha kavacham. From a higher perspective, eventually what it boils down to is one is praying for the god through different names.

Currently we do not have any way of sending your requests to Temple office. We are working on it now and will be able to provide that facility for you in future.