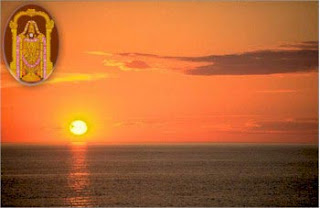 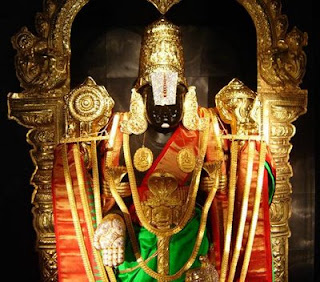 Description of Daily Sevas At Tirumala

Sevas performed for the main deity

'Suprabhatam' is the first and foremost seva at Tirumala, Suprabhatam signifies the ritual performed at Sayana Mandapam to wake up the Lord from His celstial sleep, amidst chanting of the hymns.

Every day in the early hours acharyapurushas sing the hymns beginning with 'Kausalya Supraja Rama' while adecendant of Tallapaka Annamacharya recites Annamayya's matin songs. 'Suprabhatam' hymn consist of Suprabhatam, Stotram, Prapattithe and Mangalasanam composed by Prativadi Bhayankara Annan, a disciple of the celebrated vaishnava preceptor Manavala Mamuni. Archakas, jeeyangars, temple authorities and the grihasthas who purchased tickets for 'Suprabhatam' darsan worship the Lord delightfully during this seva. Immediately after completing the 'Suprabhatam', Bangaru Vakili is kept open. 'Suprabhata seva, tickets can be booked in advance. The ritual last for over 30 minutes.Suprabhata seva will not be performed in Dhanurmasa. Instead, 'Tiruppavai' is recited during this time. The worship of Lord Venkateswara during Suprabhatam is considered highly meritorious.

Around 200 to 250 devotees are permitted to view this Seva every day.The cost of the ticket is Rs 200/- and can be purchased a day early from Vijaya Bank counter or procured from the Arijhitham officer by sending a Demand Draft before hand.

The presiding deity of Lord Srinivasa, festival deities and other deities are exquisitely decorated with floral and tulasi garlands during this seva. 'Thomala' denotes the decoration of the deities with garlands.

The grihasthas who have paid the requisite amount can have darsan of the Lord during Thomala seva. However, the priests decorate the main deity of Lord Venkateswara with flowers brought by Ekangi or flowe specially brought from Flower room by Jeeyangar. The seva is performed for 30 minutes. This seva in conducted as arjita seva on Tuesday, Wednesday and Thursday. It is held in ekantams during the rest of the week.

Archana to the main deity Lord Venkateswara is performed amidst chanting of one thousand name of the Lord. This occurs immediately after 'Suprabhatam' and Thomala seva. Devotees who have bought tickets for this Archana can take part in the seva.

The archakas offer tulasi leaves sent by the Jeeyangar to the Lotus Feet of the Lord while one thousand names are being chanted. Later, the tulasi leaves kept on the Lord's Feet are placed at the Lotus Feet of Maha Lakshmi seated in his chest amidst chanting of 'Mahalakshmi Chaturvimsati' (24 names of the Goddess). The ritual lasts for 30 minutes.

The Lord also receives second and third archanas later in the day. However, these are done in 'ekantam, and devotees are not allowed for darsan during thesr services. Sahasranama Archana is an arjita seva on Tuesday, Wednesday and thursday and on Friday, Saturday Sunday and Monday it is performed in ekantam.

Immediately after Archana piligrims who purchased tickets for Archanantra Darsan are allowed for darsan.

Srivari Kalyanotsavam is performed to the utsava murti of the Lord Sri Malayappa swami and his consorts Sridevi and Bhudevi in the marriage hall in the Sampangi Pradakshinam.

Refrence to this Seva conducted on special occasions are found in the inscriptions of the 15th century. The wedding cermony is held amidst recitation of the vedic mantras and pronouncing the family pedigree of the brides and bridegroom. The idols of the Lord and his brides face each other with a screen in between. They are allowed to see each other only at the appropriate auspicious moment when the screen is removed. The priests perform homas. A purohit conducts the marriage and an archaka is consecrated to perform other rituals on behalf of the bridegroom. This seva is not performed on important festivals like Srivari Brahmotsavam. Pavitrotsavam, Pushpayagam etc. and on the days of solar and lunar eclipses. The grihasthas who participate in the seva are given prasadams and clothes. The duration of the seva is about one hour.Kalyanotsavam
Cost of the Ticket: Rs 1000/-
No. of persons allowed :2( Husband and wife)
The tickets can be purchased a day early at Vijaya bank,Tirumala or reserved 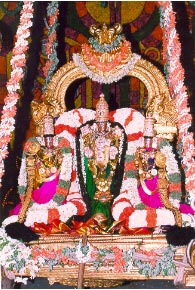 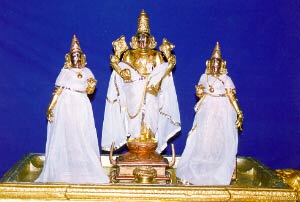 Sri Malayappaswami, Sridevi and Bhudevi are seated in an unjal (Swing) in the Aina Mahal (Addala Mantapam) opposite Ranganayaka mantapam. it is enchanting to see the gorgeous reflections of the Lord's glorious presence every where. The deities are swung to the accompaniment of Veda parayanam and mangalavadyam. This is an arjita seva an the devotees are admitted on payment of requisite fee.Cost of the Ticket: Rs 1000/-
No. of persons allowed :6
The money has be sent in advance atleast 90 days ahead by D.D.

This seva is conducted in the Vaibhavotsava Mantapam as an arjitam. The seva is offered to Sri Malayappa swami and His consorts daily. Perfumeries are lavishly used to create an ethereal atmosphere. The veda pandits chants Purusha suktam, Sri suktam and other vedic hymns. Abhishekam is done to the Lord and His consorts with sacred water. Later abhishekam is performed with milk, curd, honey and turmeric. Finally, sandal paste is applied to Sri Malayappa Swami and consorts. The duration of the seva is about one hour.

Every day evening at 5:30 p.m. Sahasra deepalankarana seva is performed in the Unjal mantapam located on the south eastern corner of the Srivari Temple.

Sri malayappa swami along with Sridevi and Bhudevi are taken out in procession to the mantapa, where one thousand wick lamps are lit. In the midst of vedic chanting and singing of Annamaya Sankirtanas, the Lord seated aon an unjal is rocked gently. The grihasthas who purchased tickets for performance of this seva are given Vastra bahumanam.Cost of the Ticket: Rs 1000/-
No. of persons allowed :5
The money has be sent in advance atleast 90 days ahead by D.D

Ekanta Seva is the last ritual among the daily sevas. Sarvadarsanam comes to a close with Ekanta Seva. Sri Bhoga Srinivasa Murthi, the silvar image of the main deity is seated in the Sayana Mantapam in a golden cot. During Ekanta seva, a descendant on Annamacharya sings lullabies to put the Lord to sleep. This seva is also known as panupu seva. Tarigonda vengamamba's harati (in a plate inlaid with one of the dasavataras on each day with pearls) is offered to the Lord. Bhoga Srinivasa occupies the cot for eleven months in a year and in the twelfth month of Dhanurmasa (Margali) Sri Krishna is put to sleep

After the kalyanotsavam,Brahmotsavam Seva is performed.In this service ,The Lord is worshipped along with his two spouses in Sesha Vahanam,Garuda Vahanam and Hanumantha Vahanam.
Cost of the Ticket: Rs 1000/-
No. of persons allowed :5
The money has be sent in advance atleast 90 days ahead by D.D.

FOR  RESERVATIONS LOG ON TO   http://www.ttdsevaonline.com/
Posted by Unknown at Monday, April 04, 2011 10 comments: Links to this post