Pattiseema is a village in Polavaram mandal of West Godavari district, Andhra Pradesh, India. It is located on the bank of the River Godavari. It is very famous for Sri Veerabhadra Swamy Temple

This is a preamble to the religious significance of this ancient temple. According to local traditions Sri Veereswara Swamy, after destroying the Yagna being performed by Daksha Prajapati and thereafter slaying him, flung his bloody weapon patta (a metallic sword) into the river Godavari which fell at this point and immediately took the shape of a linga. The Linga which self manifested itself, at this point is known as Pattiseema. There are no writings about the early history about this hill temple.

During the three or four centuries following the 12th century there existed a great Shiava Mutt this hillock on which the temple was built and maintained presumably by the kings of the Reddy dynasty of Raja-mahendra-varman, presently known as Rajahmundry twenty miles down stream from Pattiseema.

In the bed of the river Godavari on the hillock at Pattiseema, there are two hillocks lying apart in opposite direction to one and other and separated by a distance of approximately three miles. This hillock north of Pattisema is known as Maha-nandi-swaram, and the one on the south is the celebrated Pattiseema. On the hillock at Pattiseema there are two groups of temples, one headed by Sri Veera-swara-swamy and the other a Vaishnavite temple a leading shrine of Sri Bhava-narayan-swamy. In the first group the main shrine is Sri Veera-bhadra-swamy. It has sub temples of Parivara Devathas, the Deity is huge Siva linga of Sri Veera-bhadra-swamy. This is in accordance with the tradition that Lord Shiva himself took the form of Sri Veera-bhadra-swamy to destroy Daksha. The sub deities are Bhadra Kali, Sri Kanakadurga, Lakshmi-ganapathi, Kumara-swamy, Subramanian-swamy, Mahi-sha-sura-mardhini ,Tandava Vera-bhadra-swamy and Saraswati.

With the gradual decline of the Reddy dynasty due to disputes with the British Rulers, sold their kingdom in bits. The Kotcherlakotas who were the celebrated Rajgurus of the Reddy Rajas purchased a portion of the Reddy kingdom in the year 1814. The Rajgurus purchased the Polavaram Estate comprising 6,400 villages extending from Gutala to Konda-modalu on either side of the river Godavari, twenty miles upstream. In the year 1825-26 Sri Rajah Kotcherlakota Jaggaihgaru donated extensive lands (Approximately 1900 Acres) for performing Nitya Dhoopa, Deepa Naivaijam, Kalyanam and Utsavas for the Deity and also maintenance of the Temple. The descendants of Sri Raja Jaggaiah of Polavaram continue to be the hereditary trustees of this temple( KOTCHERLAKOTA RAMCHANDRA VENKATA KRISHNA RAO ).

The main festival of Lord Shiva is Mahasivaratri which is celebrated with religious fervor, pomp and gaiety. On this day approximately a Lakh (100,000) of pilgrims visit this temple. The other important festivals are the Kalyanam of the Lord on Bheeshma Akadashi and Karteeka Masam.

The significance of this temple is that it is considered as Dakshina Kashi and Patiseema Temples is one of the Pancha Kshetras. The other four being Kedarnath, Kashi, Kalahasti and Srisailam. This temple presently is controlled by the Endowments department and is under the Jurisdiction of the Endowments Ministry excepting the Tirumala Tirupati Devasthanams, which is regulated by a separate enactment.

In the second group there are three temples on the northern extreme of the hillock. They are Sri Bhava-naraya-swamy, which is as old as the Siva temple. Subsequently the Zamindar of Gutala, in the year 1912 constructed Sri Sita-rama-swamy temple. The third is an Anjeneya-swamy temple constructed subsequently.


The legendary significance of Pattiseema according to the Epics is that this temple which is located in the middle of river Godavari is considered as one of the Pancha Kshetras. Those who visit this temple need not visit the other four temples. In Skanda-puranam, Pattiseema is considered as Kailsam or Vaikuntham. This hillock is surrounded by Papi hills and abounds in natural beauty and situated in the middle of the river Godavari it is also called as Deva-kuta-dri.

In the Puranams it is stated that the mountains had wings and could fly all over the universe. Whenever they felt tired they used to descend on the earth which caused a lot of damage to life and property. Lord Indira saw the suffering caused by these mountains and chopped off their wings, resulting in the mountains settling where they landed. Thus their mobility was stopped. These mountains were called Deva-kutta-dri hill or Neela-dri hills. Deva-kuta-dri is son of Karaveera, once the king of mountains He attended the meeting of these mountains in Kailasam. In the meeting that was held Kailas-natha did not give due respect to Deva-kuta-dri. He felt insulted and left Kailash-parvatam with avow to seek revenge and went into the forest to offer prayers to Lord Shiva. Lord Shiva appeared before him and asked him what he wanted? Deva-kuta requested that Lord Shiva should adorn his crown and be with him on his mountain, to which Lord Shiva blessed him. Since then this mountain is being called Deva-kuta-dri.

Daksha-prajapati’s daughter Sati-devi was married to Lord Shiva. All the mountains including Deva-kutta along with other gods decided to attend the marriage. Deva-kutta felt as Lord Shiva was on his mountain he considered himself supreme of all the mountains. Daksha therefore decided to perform a Yagna in the name of Bruhas-pati, and invited all the mountains excepting Kailasa Mountain. Satidevi daughter of Daksha-praja-pati though not invited to the Yagna expressed her desire to attend the Yagna. Lord Shiva cautioned his wife that Daksha was performing this Yagna to take revenge on him and therefore advised that they should not attend. However she insisted on attending the Yagna alone, to which Lord Shiva agreed to her entreaties. Satidevi went to her fathers place, though Daksha-praja-pati saw her, he did not receive her and also did not treat her with due respect. He also started abusing Lord Shiva. Satidevi felt insulted and unable to bear the insult decided not to return to her husbands place. Instead she cut her last finger of her left foot and rubbed it on the earth and created a fire and jumped into it. She was consumed by the fire.

Lord Shiva, who was observing all this, became furious with rage. He plucked a shred of his long unbraided hair, struck it on the ground and created Lord Veerabhadra to avenge himself. Lord Veera-bhadra enquired with his father, why he was created? Lord Shiva who by now was trembling with anger gave his son a metallic weapon called Patta-yudha (a sword like weapon) and ordered him to destroy the Yagna being performed by Daksha and also slay him. Lord Veera-bhadra set on his mission to destroy the Yagna and also slay Daksha. After completing his mission he devourered the Vishnu Chakra of Maha-vishnu. He also broke the teeth of Sun God, both of whom tried to prevent Lord Veera-bhadra from slaying Daksha.

All the other Gods who were witnessing the entire scene prayed to Lord Shiva to restore the Pasupu-Kum-kum of Satidevi. Lord Veera-bhadra took pity on her. He then cut the neck of a goat and planted it on the shoulders of the slain body of Daksha and infused life in him. He then ordered Daksha to continue to perform and complete the Yagna, so that Daksha could attain Moksha. The weapon with which Daksha was slain fell on the earth. This place where it fell was called Patta-chalk-shetra now being popularly called Pattiseema. Lord Veera-bhadra was still not satisfied and continued with his Pralaya Tandavam, the entire universe was trembling under his feet. Out of these tremors Goddess Maha-kali was born. All the deities who were witnessing the whole scene appealed to Agastya Mahamuni to pacify Lord Veera-bhadra and calm him.

Agastya Mahamuni in deference to the wishes of all the Gods approached Lord Veer-bhadra and embraced him with both his hands. He also prayed to Lord Veer-bhadra to settle down on the hillock of Deva-kutta Parvattam. According Lord Veerabhadra agreed and settled down on the hillock in the form of a Siva-linga (self manifest or Swyambu). Agastya Mahamuni also collected the unbraided long hair and tied it into a knot on the forehead of Lord Veera-bhadra now in the form of a Linga.

Thus this hillock received its importance among all other Temples.

Note: This is a translation from the Sthala-puranam written in Telugu by the Senior Archika of Sree Veer-eswara-swamy Temple, with regards to the legendary and historical background.

Sri Veera-bhadra Swamy Temple, which is picturesquely located on a hill known as Deva-kuta Parvatha in the middle of the Godavari river. Considered to be one of the Pancha-kasi Kshetrams of the Shivaites, the temple has a beautiful Nandi Vigraha. Carved images of dancing people adorn the walls while an awe-inspiring life size sculpture of Devi Bhadra-kali with lot of ornaments and a sword, catches the eye. A temple dedicated to Sri Bhava-narayalla Swamy can also be visited.

The   Sri Veereswara Swamy Temple  is very ancient and undergone some moderation in the recent past. Veera-bhadra swamy the deity of this temple is very powerful and gift giving God.

How To Reach   Pattiseema   Sri Veereswara Swamy Temple ?
To Reach this place take a taxi from Rajahmundry. This is roughly 35 km from Rajahmundry.
Road: Located 120 Km from Elum& 25 Km from Kovvur.
Rail: Nearest Main  Railway station is Rajahmundry


Posted by Unknown at Thursday, October 06, 2011 No comments: Links to this post


Korukonda Sri Lakshmi Narasimha Swamy Temple is located at a distance of 60 km from Kakinada,20 Km from Rajahmundry and 110 km from Amalapuram. This is an ancient and historical temple and also a Vyshnava Divya Kshetra. The daily rituals are being performed according to Vyshnava - Vyghanasa Agama Sastra.
There are two temples out of which one is Swayambuvu and another is Prathista Deity. The Swayambhuvu is situated in about 120 mts. height having about 615 steps which are very keen and because of this keen formation of the hill the village is named as "Korukonda".

The deity which is a Swayambhuvu appears in a holy place at the top of the hill measuring about 9 inches. It is really wonder and mankind could not be instate either the deity or any other stone which is about 120 mts. height, the temple which was constructed long long back have got much Silpa Soundaram around it.

There are number of Sila - Sasanams appeared in the temple and as well as on the top hill of the temple. The temple was constructed about 700 - 800 years back and the family of Parasara Bhattar were looking the affairs of the temple and the same tradition is still being continued by recognizing the family members as founder trustee.

There is no doubt this is a very good looking place having site seeings through out the hill and steps. The great poet Sri Srinatha in his poetry prayed the God stated, this Korukonda is "Vedadri". This was supported by Sila - Sasanam which was found at Lakshmaneswaram Village, Narsapur Taluk, W.G.Dt. which related to 1443 A.D.


Recently the Government have proposed to take up developments around this temple noted as a tourism place. 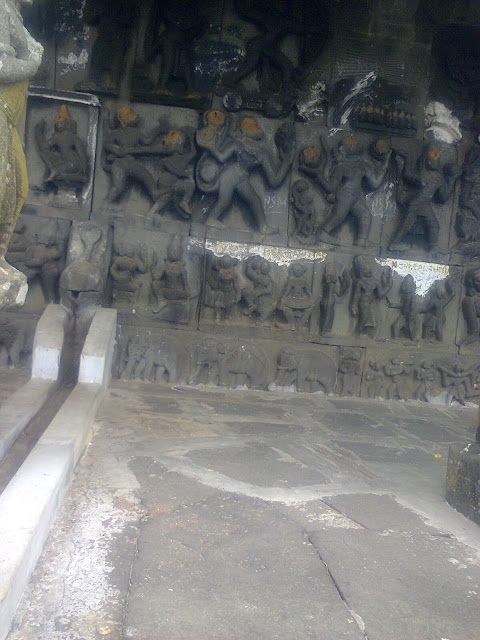 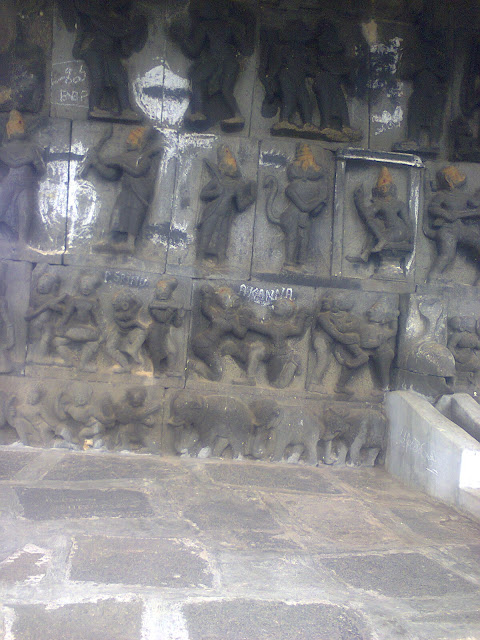 Somany Deluxe Hotels, 3 Star and 5 Star Hotels are available at Rajahmundry, Rajahmundry is 20Km away from Temple.


Posted by Unknown at Tuesday, October 04, 2011 No comments: Links to this post