Simhadri or Simhachalam temple is a Hindu temple located near Visakhapatnam in Andhra Pradesh, South India. It is dedicated to the incarnation (avatar) of Vishnu known as Narasimha (the man-lion).


Origin of the name 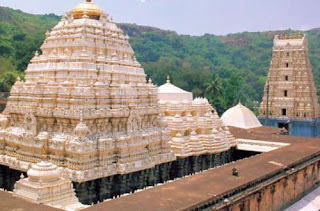 Atop the hill is a famous temple said to be the abode of Varaha Narasimha Swami, and hence the hill itself is called (nara) simhachalam. The temple is situated in the city of Visakhapatnam in Andhra Pradesh.

It is one of the eighteen "Naarasimha Kshetras" i.e. shrines of Lord Narasimha in India. Simhachalam temple is known as the second richest temple in India (after Tirupati) earning a revenue of Rs. 520 million. The statue of the deity gives "nijaroopa darshan" (holy appearance in true form) for only 12 hours in a year i.e. on Akshaya Tritiya day, the rest of the time the statue is covered with Sandalwood paste. The darshan described as 'Chandana yatra' or 'Chandanotsavam' falls every year in Vaisakha masa (May).

Hiranyakasipu was a Rakshasa king. He was in fact one of Vishnu's Dwarapalakas or gate keepers in Vaikuntha, Jaya and Vijaya. They had to take birth in the mortal world thrice because of a curse given by Sanaka, Sanandana, Sanathana and Sanathkumara, who were not allowed to take darshan of Mahavishnu by them. The other palaka was born as his brother Hiranyaaksha.

Hiranyakasipu wanted to become immortal and hence performed austerities (tapasya) to propitiate Lord Brahma. However, Lord Brahma said that was not possible so Hiranyakasipu asked Lord Brahma to grant him a boon so that he could not be killed by any animal or a man neither in the morning nor in the night, by any weapons, neither in sky nor on the earth.

Hiranyakasipu wanted the entire world to worship him. But, Prahalada, his son, was a devotee of Lord Narayana and always expressed his bhakti towards Him. In spite of warning him several times, Hiranyakasipu could not alter Prahlada's devotion.

This made Hiranyakasipu angry and he made numerous attempts to get Prahlada killed. One of them was to throw him off the top of a mountain. However, Vishnu rescued him by moving the mountain and made a small path for Prahaladha. It is said that in the place where the Lord stood to protect Prahaladha is the place where the temple is built.

The most important thing about this temple is that here we can't see the God's feet. It is said that the feet is buried inside the earth. Lord Narayana came to rescue Parahalada on Garuda and when they threw Parahalada Lord Narayana jumped from Garuda to save him and in this process his feet went deep into the earth.

It has Sri Varahalakshmi Narasimha Swamy as the presiding deity.

Giripradhikshana [cirum ambulation] around the hill range [~40 km]from Hanumantha vaka / MVP colony to Simhachalam is done by piligrims during the auspicious days. Crowds of elderly people / youth / children are observed walking the 40 km stretch over night. They visit the temple after the long journey and give their offerings to the deity.

The deity at Simhachalam, the lion-man incarnation of Lord Mahavishnu is usually covered with sandalwood paste. The original shape of the deity in the tribhanga posture has two hands with the head of a lion on a human torso. An inscription dated as far back as 1098 AD of the Chola King Kuloththunga provides some clue as to its antiquity. Another inscription shows a Queen of the Eastern Ganga of Kalinga (ancient Orissa) (1137-56 AD) covering the image with gold while a third inscription says the eastern Ganga King of Orissa, Narasimha Deva, built the main/central shrine in 1267 A.D. With more than 252 inscriptions in Oriya and Telugu describing the antecedents of the temple, it is a historically important monument.

Sri Krishna Deva Raya after defeating the Gajapati ruler of Orissa Gajapati Prataparudra Dev visited the shrine twice in 1516 AD and 1519 AD and offered numerous villages for maintenance of bhogam (worship) along with valuable jewellery of which an emerald necklace is still in the temple. For the last three centuries the Royal family of Vizianagaram, "The Pusapati Gajapathi's" have been the temple's trustees.

In October 2007, the Government of Andhra Pradesh approved a master plan for the development of the region into Divyakshetram on similar lines of Tirumala.

The Simhachalam temple faces West unlike so many others which face East. An east-facing entrance, according to religious belief, brings prosperity while a west-facing one brings victory.

The hill top road, as well as the location of the eastern ghat ranges are beautiful and pictersque. The hills are densely populated with trees of various types like Cashew, shrubs, mango groves etc., The forestry is protected and well conserved. The greenary is really good and attracts tourists as well as nature lovers for spending their leisure in praising the nature.

The localities near the piligrame include Srinivasanagar, Prahladapuram,Sainagar colony, Simhapuri colony and many other housing areas.

On Vaishakha Shudda Thadiya (the third day in Vaishakha masam), the real form of the Lord with wild boar’s face, human trunk and lion’s tail will be exposed to public view. Of the four layers of chandanam to be applied to the deity, the first layer is applied after sahasra ghatabhishekam at 9 p.m. on Akshaya Tritiya day. The second layer on Vaisakha Poornima, the third on Jyesta Poornima, and the final chandanam pootha on Ashada Poornima.

are available to the pilgrims at Simhachalam.

For more accommodation in simhachalam narasimha swamy temple log on to

I really appreciate your efforts and interest on putting things together.