Amaravathi (అమరావతి) is a small town situated on the banks of the River Krishna in the Guntur District   of Andhra Pradesh, India. It is famous for its Amareswara temple dedicated to Lord Shiva. The temple is one of the famous Pancharamas. Amaravati, also known as Dhanyakataka/Dharanikota was the site of a great Buddhist Stupa built in pre-Mauryan times. It was also the capital of Satavahanas, the first great Andhra kings who ruled from the 2nd century BCE to the 3rd century CE, after the downfall of Maurya empire.

The Skanda Purana gives a picture of the place and the Siva temple located here. Sage Narada explains to Sounaka and other saints that Amareswara is situated in Amareswaram on the bank of river Krishna and is on the southeastern side of the Srisailam temple.


According to Vajrayana traditional sources the Buddha preached at Dharanikota/Dhanyakatakam and conducted Kalachakra ceremony, which would take the antiquity of Amaravati back to 500 BCE. Taranatha, the Buddhist monk writes: "On the full moon of the month Caitra in the year following his enlightenment, at the great stupa of Dhanyakataka, Buddha emanated the mandala of "The Glorious Lunar Mansions" (Kalachakra). This shows that Dhanyakatakam (Amaravati) was a very important place at the time of composition of this tantra. The recorded history of Amaravati and nearby Dharanikota dates from 2nd century BCE.It was the capital of Andhra Satavahanas who ruled from 2nd century BCE to 3rd century CE. After the decline of Satavahanas, Andhra Ikshvakus and later Pallava kings ruled Krishna river valley. Subsequently, Eastern Chalukyas and Telugu Cholas held sway over the region. Kota Kings were in control of Amaravati during the medieval times. Kota kings were subdued by Kakatiyas in 11th century CE and Amaravati became part of the unified Telugu empire.

The town was the site of a great Buddhist stupa originally built during the reign of emperor Ashoka. It was completed in 200 CE and is decorated with carved panels which tell the story of Buddha's life. The region between Krishna and Godavari rivers was an important place for Buddhism from the 2nd century BCE and some ancient sculpture in low relief has been found here. During the Satavahana period (2nd century BCE-3rd century CE), Dharanikota near Amaravati was chosen as the capital. The stupa was then adorned with limestone reliefs and free standing Buddha figures. During the period of the decline of Buddhism, this stupa was also neglected and it was buried under rubble. There is a 14th century inscription in Sri Lanka which mentions repairs made to the stupa and after that it was forgotten.

Around the year 1796 CE, Colonel Colin Mackenzie, who visited the site twice, prepared drawings and sketches of the relics in the area. Eventually, several European scholars including Sir Walter Smith, Robert Sewell, James Burgess and Alexander Rea excavated the site and unearthed many sculptures that once adorned the stupa. Many bas-relief medallions and paneled friezes decorated the Amaravati stupa. Similar to Sanchi Stupa, the stupa was decorated with carvings of life and teachings of Buddha and events of Jataka Stories, e.g. taming of a rogue elephant by Buddha. The 95 ft tall stupa was made of brick with a circular dome and platforms protruding in four cardinal directions. Recent excavations have revealed remains of an Ashokan pillar, the first such example of Mauryan art to be found in South India.

This stupa is related to the Vajrayana teachings of Kalachakra, still practiced today in Tibetan Buddhism. According to the Kalachakra tantra texts, Suchandra, the King of Shambhala and many of his retinue received the initiation into this practice by the historical Buddha. For this reason, the Dalai Lama of Tibet conducted a Kalachakra initiation at this location in 2006.

Art historians regard the Amaravati art as one of the three major styles or schools of ancient Indian art, the other two being the Gandhara style and the Mathura style. Some of the Buddhist sculptures of Amaravati betray a Greco-Roman influence that was the direct result of the close trade and diplomatic contacts between South India and the ancient Romans. Indeed, Amaravati has itself yielded a few Roman coins. The Government Museum at Egmore (Madras Museum) and British Museum, London host the "Amaravati Gallery".

Chinese traveller and Buddhist monk Hiuen Tsang (Xuanzang) visited Amaravati in 640 CE, stayed for sometime and studied 'Abhidhammapitakam'. He observed that there were many Viharas and some of them were deserted, which points out that Hinduism was gaining ground at that time. Xuanzang wrote a glorious account of the place, Viharas and monasteries that existed.

The Amaravati school of Dravidian art had great influence on art in Sri Lanka and South-East Asia as products from here were carried to those countries.[9] Trade between the dynasties of Tamilakam led to cultural exchange in the Sangam period. Sculptures such as the Vallipuram Buddha reveal a period of influence between Andhra and Jaffna at this time. In a pioneering study and meticulous documentation of the Buddhist sculptures of Sri Lanka, Dr. Ulrich Von Schroeder has listed up with measurements several lime stone sculptures, both round and in relief, from the Sri Lankan sites. The chapters in the work clearly go with a heading 'Imported Sculptures from Early Amaravati School', and 'Imported Sculptures from late Amaravati (Nagarjunakonda)'. It is clear that the artist guilds in Amaravati-Nagarjunakonda were engaged in the large scale supply of Buddhist sculptures, as also brahmanical, to Sri Lanka and other South-Asian countries.

Religious ideology was a potent force providing cohesion and identity to trading communities and it was perhaps through these channels that the early Buddhist/ Brahmanical images found their way into South-East Asia and Sri Lanka. At Sempaga in Celebes, a bronze image of Buddha of the Amaravati School was found. The earliest sculptures from Dong-Duong. Dong Tuk (Siam), exhibit Amaravati style. A bronze Buddha from South Djember and Sikendeng on the west coast of Celebes, and the colossal statue at Bukit are all in characteristic Amaravati style. It is quite likely that these image were brought from Andhra centers by the colonists. The transport of the large stone Buddha of Palembang must have been more difficult. It is the oldest relic from Amaravati in the archipelago. Sea route voyages connected Indian ports of the South such as Machilipatnam, Ghantasala etc., with Indonesia. Amaravati school also had a great influence over other South Indian sculpture.

The Amareswara (Shiva) temple walls have lot of inscriptions that give information about the kings who ruled over the area. The present holy shrine of Amaralingeswara (Lord Shiva) temple is associated with the reign of Vasireddy Venkatadri Nayudu who ruled the region before the advent of the British rule (See Amararama). People around Amaravati widely believe that the temple was constructed to install peace after a massacre of 1000 violent tribesman plotting against the king in a sinister carnival organized to capture them. Later Venkatadri Nayudu built a temple in the same spot upon guidance from scholars of his court. He was well-known for his benevolence , munificence and construction of a large number of temples and education centers in the Krishna river delta. 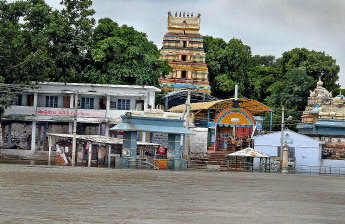 By Rail : The nearest railheads are Guntur and Vijayawada. A good network of connect Guntur to Amaravati.

By Road : Amaravati is situated 20 miles northwest of Guntur and is connected by a good motorable road.

Local Transportation : Taxis and buses are available from Guntur.


Accommodation is available in the Rest House, Hotel Mamta and Swapna Lodge at Amaravati. There are also a Public Works Department Travellers Bungalow, some choultries and sheds for pilgrims' to stay.

The Undavalli Caves, and example of Indian rock-cut architecture are located in the village of Undavalli in Guntur District, in the state of Andhra Pradesh, India. The caves are 6km south west of Vijayawada, 22km north west of Guntur City and about 280 km from Hyderabad, Andhra Pradesh.

These caves have been carved out of solid rock on a hillside in the 4th to 5th centuries A.D.They have four stories with a huge statue of Lord Vishnu in a reclining posture sculpted from a single block of granite inside. Other shrines are dedicated to Trimurti and to Brahma, Vishnu and Shiva.They are among the earlierst example of Gupta architecture, primarily primitive rock-cut monastery cells carved into the sandstone hills.
The walls of the caves display sculptures carved by skilled local craftsmen. The structure of these caves resemble the Buddhist viharas in their architectural and sculptural proficiency, and can be seen as signs of a past Buddhist culture. The caves are surrounded by the green countryside

The caves are associated with the Vishnukundina kings of 420 to 620 A.D. They are dedicated to Anantapadmanabha Swamy and Narisimha Swamy.From the high hill above the cave overlooking the Krishna river many fine specimens of rock cut Hindu architecture can be seen.
Posted by Unknown at Monday, October 31, 2011