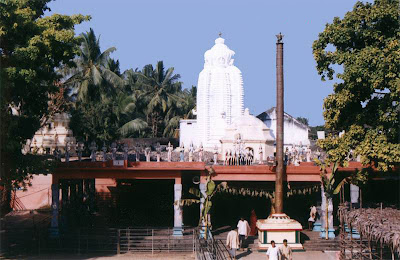 
Once Lord Devendra , Ignoring the words of Dwarapalaka Nandi , attempted to force his entry for Darshan of Sri Rudrakoteswara Swamy varu at an untimely hour when Lord siva was along with his consort . The Dwarapalaka Nandi in the discharge of his duties kicked the intruder . Thus kicked and injured by the Devine attendent Indra fell down senceless . And in his unconscious state Indra dreamt that he would be relieved of his pain of injury in his chest caused by Nandi if he built a temple and installed an Idol of the Sun God . After regaining his consciousness , he remembered what he dreamt .

Following his dream he pickedup handfulls of earth three times at a place where he lay ,and there he found this beautiful idol of sun God with his three consorts Usha , Chaya and Padmini . At the base of the idols are the figures of Mathara and Pingala the Dwarapalakas and high up are the two divine saints , sanaka and sanadana holding 'Chatrams'(An Umbrella ). The Sun God is depicted as riding over a chariot drawn by Anura, the Radhasaradhy . All these figures are exquisitely carved out of a single black finely polished grenite stone. 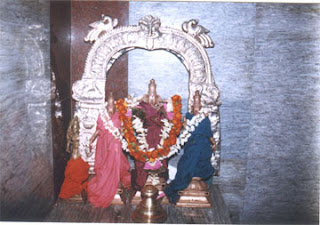 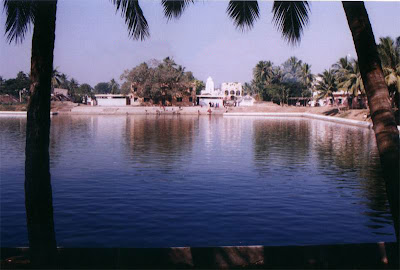 
This temple is a testimonial for the architectural skills of Vishwakarma Brahmin sculptors. It is believed that the Orissa Vishwakarma Brahmin sculptors also called as Maharanas in Orissa have planned the architecture and sculpted this engineering master piece. The temple is built in such a way that the Sun rays fall on the feet of the God twice a year in the months of February and June during the early hours of the day. The rays fall on the feet of idol for a few minutes through the five entrance gates of the temple remin closed. the five idols installed in one place in the temple viz., 1.Aditya 2.Ambica, 3.Vishnu, 4.Ganesha, 5.Maheswara are worshiped by different devotees.The Sun God is depicted as riding on a Chariot drawn by seven horses driven by Aruna. All these figures are exquisitely carved out of a single black granite stone. Sundays during the five months from Magha masam are considered sacred. Every Sunday people from different places from Andhra & Orissa come here for worshiping the Sun God. This temple was built in the Orissa style of temple architecture.


Search for Light and Truth has been the guiding principle of Vedic Seers of hoary antiquity in their earnest endeavors to solve the eternal problems of creation. “Jyotiranveshayamaha” - ‘Let us search for Light, heavenly Light’ was their motto. It is interesting to note that the Royal Astronomical Society of Britain has the same motto, “quick quid nitil notundum” - means, “whatever shines must be observed”. A Russian sentence goes on, “Rays of light are the emissaries of their master, the source of light, the Sun.

Devotees of every age testify to the appearance of God as light. And throughout the world, Light is considered the symbol for all splendor and glory of the Spirit. It stands for Truth, Order, Reality, Goodness, Beauty, Intelligence, Wisdom, Bliss and Immortality or “Amritattwa”. Therefore, the Sun is Light and Life, Love and Law. “Let there be Light! And there was Light”, the Bible saith. The soul of the universe or “Hiranya Garbha” sustains and upholds the entire universe; all animate and inanimate beings live through the Sun.

This famous Sun God Temple in the world is situated in Arasavalli Village which is at a distance of about 1 KM east of Srikakulam Town in Andhra Pradesh head courters of the coastal district in Andhra Pradesh, India.

Srikakulam is the capital and head quarters of Srikakulam District and is the largest town in Srikakulam district, Andhra Pradesh in india.

Accessibility:
Srikakulum is well connected by rail and road. The nearest airport is at Visakhapatnam.

By Air:
Visakhapatnam air port is the nearest airport to Srikaulam district. Kingfisher and Air Deccan operate flights from Vishakhapatnam airport to Hyderabad, Chennai, Kolkatta and Tirupathi. Visakapatnam is nearly 100 kms from Srikakulam.