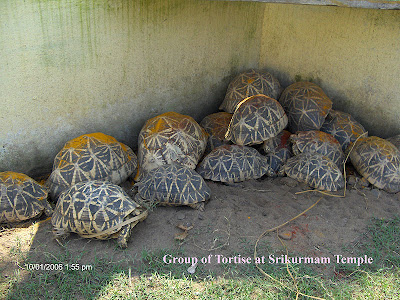 Sri Kurmam is a Village near Srikakulam, Andhra Pradesh, India. It is located approximately 13 kilometers east of Srikakulam town near the sea. It is in the Gara Mandal of Srikakulam district.

According to inscriptions in the temple dated 1281 A.D,[2] the holy place of Kürmakshetra, was actually reestablished by Sri Ramanujacharya under the influence of Jagannatha Deva at Jagannatha Puri, Orissa. Later the temple came under the jurisdiction of the King of Vijayanagara. The deity was worshiped by the Vaishnavas of the Madhvacharya Sampradäya. Some Oriya inscriptions are said to be written by Sri Narahari Teertha, who was in the disciplic succession of Madhvacharya(not to be confused with Madhavacharya). He later became the ruler of Kalinga Province(ancient Orissa) and fought with the Sabaras, and saved the temple of Kürma. Narahari Teertha was a very religious and powerful king who died in the Saka Era 1203. The temple was constructed and dedicated in the holy name of Yogananda Narasimhadeva. This temple was built in the Orissan temple architecture style. 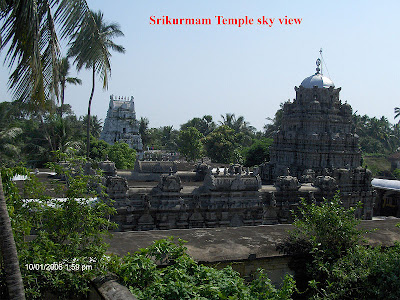 There is a temple dedicated to Sri Kurmanatha, which is the second avatar of Lord Vishnu, Kurma avatara(Tortoise). This is the only temple of Kurmanatha in India. There is also a Yoganandha Narasimhan temple in front of Sri Kurmam temple. Simhachalam Devasthanam took the responsibility for the temple improvement.

The moolasthanam (central piece) is considered to be large saligrama.[3] The Kurma(Turtle) is known as Sri Kurmam in the 'Sampradayam'. The image is not a sculpture crafted by man, but the fossil of an actual (large-size) turtle, which must have paddled on to the 'kshetram' where the shrine has been built. The head of the deity is in the form of a Kurma (tortoise) and is represented by a Vishnu namam, the tail being represented by a Saligrama presented by Adi Sankaracharya. The artistic beauty of the temple lies in the carvings of Vishnu and other deity statues in a glorious way of architecture. There is a mandapam in front of the temple on Lion pillars. One unique feature of this temple is that it has Dhwajastambams in the front and back of the temple. That is because the deity faces the back of the temple on the west.

I hope you have no objection.
Thank you.
Satya